Multiple digital devices, too many windows open on your computer, and an overload of social media notifications can be very distracting when one is attempting to work, to focus, to write, and to produce, but what about when one is socializing, out to dinner with friends, at a cocktail party, or spending time with family?

One of the reasons that I am pursuing this line of inquiry is because I am often the one most attached to my phone in social settings. Why am I the one is another line of questioning entirely, but my initial thoughts are that I'm a non-linear over thinker. I've often described my thought patterns to mirror the Internet jumping from one idea to the next in attempts to regroup them in a new and original way. I think fast, talk fast, move fast, often forgetting to stop and appreciate the moment, or finish my thought or sentence. I'm a 7 on the Enneagram and an ENFP on the Myers Briggs, as well as self-diagnosed ADHD, and I think all of these contribute to the perfect storm of personality to be susceptible to technology overuse bordering on addiction. What this means is that I may be one of those people who needs more structure and support in order to detach.

Recently, a colleague told me that when his 24 year old daughter goes out to dinner with her friends, they all put their cell phones in the middle of the table, face down. The first person to reach for his phone pays the bill. I thought that was clever and unusual, until I heard the same story from two other people in the same week. It's an interesting idea, and yet I've not done it yet. I do leave my phone on silent in my purse now, rather than laying it on the bar or table when out.

I believe large gatherings or cocktail parties may be a little different depending on what you are wearing, but if you have a pocket for the phone, it can be all too tempting or even instinctual to look at social media or texts rather than socializing. 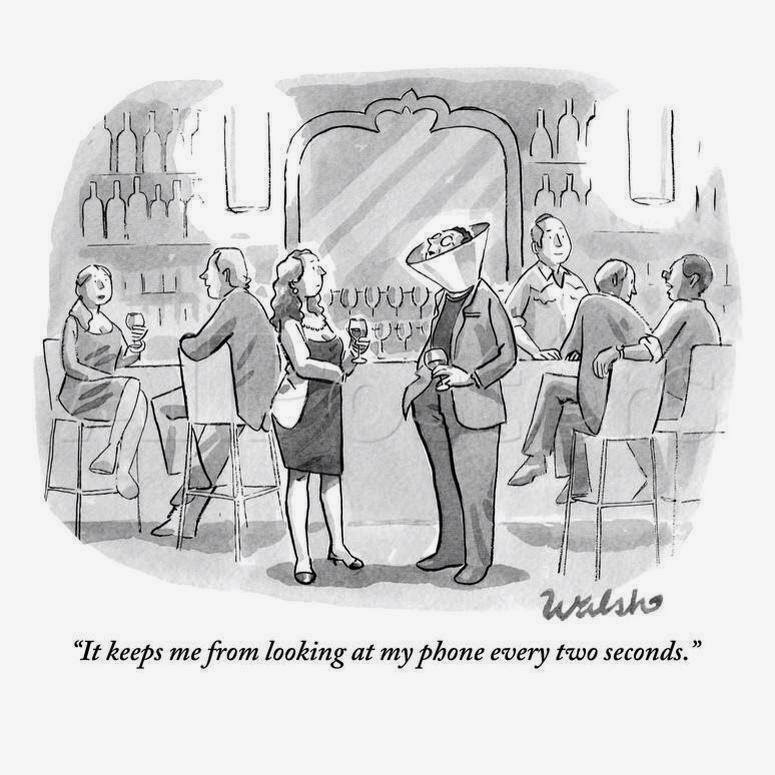 Initially, I found this New Yorker cartoon on the Wisdom 2.0 Facebook Page. Wisdom 2.0 was the conference I attended in San Francisco last month which prompted my current investigation of mindful media use. Wisdom 2.0 was the coming together of the tech and business communities with the wisdom communities to brainstorm, collaborate, and create a world more humane in the fast paced technology. In a simplified description: the CEOs of Google and Facebook meet Eckert Tolle and Jon Kabat-Zinn. The first step in addressing any perceived problems with technology is perceiving the problems. The following video reinforces the New Yorker cartoon, emphasizing that our society is aware that sometimes social media upstages those we are with socially.

What do you think? I'd love to hear your comments!
Posted by Unknown at 3:11 AM