I don’t usually coincide a blog post with an IPO, but the popular, and quite addictive, game Candy Crush Saga’s company, King is going public tomorrow, Wednesday, March 25. It was just by happenstance, as I was doing my research, that this caught my eye. I had never heard of Candy Crush, mostly because I do not play online games, but after hearing of the IPO, I decided to investigate. Online Gaming Addiction is as real as other types of Internet Addiction, and when the games are violent, they can be even more harmful.

Candy Crush is not violent, though, and it is the most popular Facebook game, recently surpassing Farmville 2. With over 500 million downloads, earning $900,000 a day, Candy Crush is a bit of an anomaly. There are some investors who question it’s staying power, but for now it is number one.

Online gaming is popular for many reasons, but the top three appear to be escapism, social interaction and constant rewards. Candy Crush has all of these, as well as a slow and steady pace, the right level of difficulty, with levels that gradually increase, and Freemium. It is free to start, but if you’d like to purchase another chance or a few more tries, you can do so for as little as $.99, each time. The intricacies of the game create a compulsion loop with its ease of access, random rewards, enforced withdrawal and constant progress. This is the same loop that triggers dopamine in other aspects of technology like the ding of a text or notification, multiple sensory action, and likes on an Instagram. 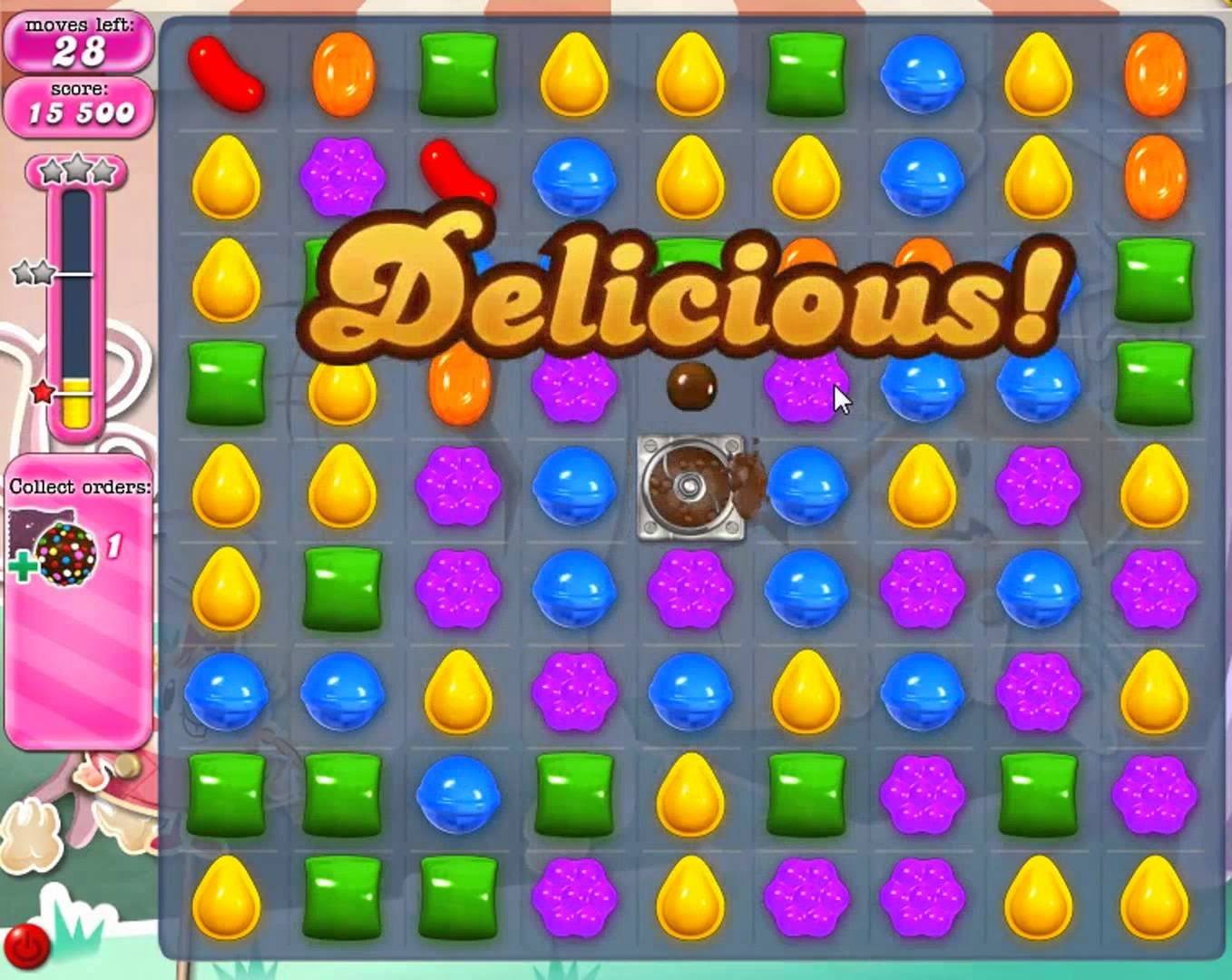 In order to write about Candy Crush, I needed to experience it for myself. I downloaded the APP one night and began to play. I realize that I am impatient with technology, so I didn’t really read the rules. I moved up levels at first, but I didn’t really understand the game. Once I read some of the rules and the “cheats,” I became more adept. Could this be addicting? One night I learned that it could be.

I decided to see what it was like to start playing the game when I woke up in the middle of the night, as research. I progressed through ten levels quite quickly until I reached Level 23. I was aware of my behavior, but I was also testing out the addictive qualities of the game. When one tries to master a level too many times, they run out of lives and have to wait an allotted amount of time before playing again. For the sane person at 2 am that would be a signal to turn it off and go to sleep, but since this was research, I spent the $.99 and received more lives. Level 23 is very hard. I did not succeed, so I spent another $.99. At the end of those lives, having not succeeded, I decided my research could afford one more $.99 purchase, but after I failed again, I turned the game off and went back to sleep, after being awake for over 2 hours of "research."

As I read about others' experiences with the game, I understood some of these comments. One woman said, “Like a patient with a severe disease, I played one level after the other causing me to skip meals, deprive myself of sleep, abuse my eyes, and bother others for "life" and "ticket"” There was a more extreme tale from another who spent $236 in one day attempting to move up the levels. She wrote,  “And if you have yet to touch Candy Crush, please, for your own sake, don't. Let this be a cautionary tale, and continue living your life, unencumbered by the beckoning call of oh-so-satisfying exploding candy. It's not worth it.”

Researchers of online game addiction concur with these personal stories "Constant rewards, whether it be leveling up or finding a rare item, gives players a constant sense of progress... These constant rewards not only cause players to continue to their next goal, but spark the same pleasure center that other addictions feed off of."

A couple of days ago I wrote on my own Facebook page, "I'm writing a blog entry on Candy Crush, especially since it's going public this week.”

My friends who responded had either “Never played. No desire,” or “Play, but do not pay," and "I never pay... and now am stuck on a hard level and cannot get by without a purchase and I won't budge on that... so I have lost interest in the game completely." What was more interesting from some was the fact that they knew others who may have an addiction. “My cousin is on a level in the 500s and that just strikes me as odd – how long did it take to get there – I guess she’s been playing since it started?” Another friend wrote, “I think there should be a few interventions…not naming names,” insinuating that Candy Crush can be a problem for some, which is not surprising given its success. One friend admitted that she gave it up for Lent, and another had never heard of it, but thought she’d check it out. Uh Oh!

It will be interesting to follow the IPO tomorrow into its initial months to see if the phenomena continues especially since it’s revenue has increased 1000% in a year.
Posted by Unknown at 12:23 PM